The holiday season is upon us.  (OK, I know it is early November, but the trees are going up in the stores, and the Hallmark Channel is starting with the holiday specials.)  The holiday season always reminds me of the amazing way my mother handled a situation with me when I was 12 years old.

My great-grandfather stopped by in early December to drop off his holiday gifts.  I don’t remember what my brothers received, but I do remember what I received.  Avon Face Powder.  Now, I am not bashing Avon or face powder, but I was 12.  My great-grandfather was in his 90s at the time, so this probably made sense to him that a preteen girl would want something that was considered elegant and extravagant, in his day.

I was polite and thanked him, but after he left I started to cry.  My mother could have slipped into a “you are ungrateful, he is 90-year-old man” sermon.  Instead she non-judgmentally stated that she knew I was disappointed, but that there might be a family in need where the mother would appreciate the gift.

My mother then spent the next few hours on the phone finding an agency that would accept the face powder.  (This was before the internet, and was surprisingly difficult to find an agency that accepted gifts for families in need.)  My mother was a single parent with three children.  You really couldn’t have blamed her if she took the easy way out, told me to be grateful, or replaced the gift with something else.  Instead we ended up “adopting” a family for the holidays.  We went out, as a family, and purchased gifts for everyone in that family, wrapped them (including the face powder and some additional make-up for the mom), and delivered them to the agency.

This became a yearly tradition, something we did every holiday season.  To this day I can’t imagine the holidays without donating to Toys for Tots or adopting a family from the tree at the Y or the mall.  And that Avon Face Powder represents one of the best holiday gifts I ever received. 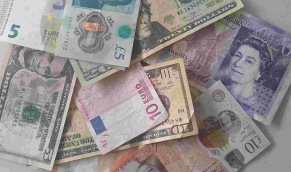 Before a recent trip to Grand Cayman (for vacation, not to visit our hidden millions), my husband and I were lamenting the fact that their money is worth more than the US dollar and that everything would be more expensive. We explained to our daughter that the Cayman dollar was worth $1.20 for every one US dollar, and that each time we purchased something, we would be paying 20 cents more. We told her that if we exchanged one US dollar for Cayman money, we only get back 80 cents. She didn’t think this was quite fair, but she didn’t appear to be overly concerned. We didn’t tell her that sometimes you have to pay an exchange fee in addition to the conversion. A discussion for another day.

Grand Cayman accepts US dollars, and most things are priced in Cayman and US dollars to make things easier for the sun addled tourists. We did not exchange money since it isn’t necessary, but looking back, I wish we had exchanged a few dollars. Physically handing over one dollar and receiving only 80 cents back would have been an amazing authentic experience for our daughter.

Even without actually exchanging money, she had some valuable authentic experiences. When we ate at restaurants, she saw both prices on the menus. She was shocked when her chicken tenders were $14 Cayman and $16.80 US and when her spaghetti was $15 Cayman and $18 US. Now things were getting personal, but not personal enough. We were paying for her food, so this “unfair” pricing didn’t have any impact. However, when we went to the resort gift shop on our last day, the exchange rate became real. We gave her a budget of $20 US, but reminded her about the 20 cent deduction per dollar. This left her with about $17 Cayman to spend. She was less than thrilled with the automatic $3 deduction from her spending limit, but when in Cayman… She chose a Christmas ornament that was $10 Cayman and keychain that was $4 Cayman (every tween needs at least 15 keychains to hang off their backpack-with no actual keys on them.) She had to leave behind the $5 magnet (that would have ended up lost in a desk drawer for all eternity). She advised us that in the future we should pick a place where their money is worth less than ours. We advised her that next time we could leave her home!

One of the first words my daughter learned to read was “nut” and not because we had read ​Guess How Much I Love You?​ several hundred times (Nutbrown Hare was always a favorite). She is allergic to some tree nuts and it was vital that she could read that word on a food label. Food labels typically state if there are “tree nuts” in the product or if it was manufactured in a facility where they are processed. We knew that as a preschooler, there was little chance she would need to independently decide if she could eat something, but being able to read “nuts” was a first step in teaching her to manage her allergies. (She already knew not to eat anything unless one of us or a teacher said it was safe for her.)

Our daughter had an authentic learning experience reading food labels when she was four years old. It was the first time she found the words “tree nut” on a package of chocolate chip cookies at the grocery store. We had practiced reading the word “nut”, looking at food labels, and finding the allergy statement at the end of the ingredients list, but this was the first time an authentic learning experience had presented itself. When she asked if she could have the cookies, I told her to read the ingredients. She had eaten chocolate chip cookies before, but not the brand she had picked up. She turned the package over, found the ingredients list and, as we had taught her, pointed to each word. I watched her face as she “read” the ingredients and saw the disappointment when she reached the familiar words “tree nuts” in the allergen statement. I gave her high-fives fit for Super Bowl winners and praised her for reading the label so carefully. I reminded her that if she had not read the label and had eaten the cookies, she could have had an allergic reaction. I was beyond proud of her and she was very excited to tell my husband that she “saved herself” at the store. She eventually chose a box of allergy-friendly cookies, so fear not, she did not suffer from lack of sugar consumption that day. That experience taught her how vital it was to read the ingredients even when the picture on it appeared to be something she could eat.

Reading food labels has had an unexpected benefit. Although I always tried to eat healthfully and limit junk food, I don’t recall ever reading an ingredients list until our daughter was diagnosed. It was (and continues to be) a truly eye-opening experience. When you are forced to read ​every​ ingredient on ​everything​, you see exactly what is in all those packaged products. It is usually not appetizing in the least. You see the chemicals, the various forms of sugar, the dyes, the preservatives, and the processed ingredients. Reading food labels has been an ongoing authentic experience for me because it has led to a greater awareness of what is in various products. It has caused me to make cleaner, more nutritious food choices. I encourage everyone to start reading food labels. Children, teens, and adults can all learn so much in the minute or two it takes to read the label. You may even decide to make a homemade version of something you were about to buy when you see all the unnecessary ingredients in the packaged version. Cooking at home lends itself to myriad authentic learning experiences.

Having food allergies has provided our daughter many authentic experiences. She now knows that ingredients may have more than one name (for example: casein for milk, sucrose/glucose/fructose for sugar, filbert for hazelnut) and she learned the importance of not cross-contaminating ingredients when cooking or baking. I hope that as she gets older, reading the ingredients will cause her to become more discerning with her food choices. For now, as long as there as there are no tree nuts in something she chooses, there can be radioactive waste in it!  Although I would obviously erase all of these experiences to erase her allergies, they provide a small compensation and a little silver lining for anyone who lives with an allergy.

This is a new section for my blog.  I felt like something was missing and this was it.  Reading, Writing, and Math are all important, but if your child can’t socially navigate our complex and complicated world, then your child’s future is limited.

Future posts with authentic ideas and anecdotes to follow soon….

There are many possible authentic projects for students that would like to adopt older folks from an assisted care community or residence.

A few ideas (depending on the number of students involved, these ideas can be for all residents, a few, or even just one):

Get a list of everyone’s birthdays in the residence, chart/graph this and make cards for birthdays.

Create surveys asking residents about favorite things, write stories, poems, etc., based on the results of the survey.

Create and send a student generated monthly newsletter, magazine,  or newspaper.  Copy for each resident.

The International Card Exchange for the Elderly

It lists homes that are asking for cards.  Listings are international –  a great authentic tie in with geography.  *I am not sure how current this page is, make sure and check out that a listing is current before you have students create cards.